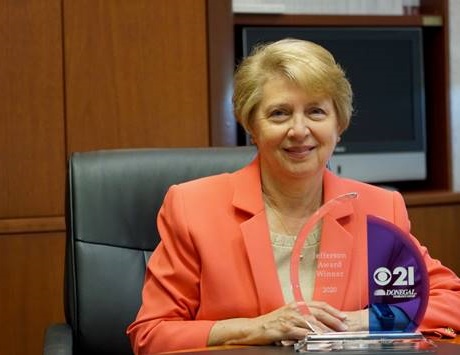 Lori K. Serratelli has accomplished much over her career as a family and employment law attorney for over 40 years. In June 2016, she was honored with an appointment by the Governor and confirmed unanimously by the Pennsylvania Senate to the Dauphin County Court of Common Pleas where she served in the Family Law Division and presided over Orphan’s Court and civil litigation matters. Her appointment ended January 1, 2018 when she returned as “of counsel” to the firm she originally founded to handle complex family, Orphan’s Court and employment matters.

Former Judge Serratelli offers services in mediation and arbitration in the areas of family matters, Orphan’s Court and employment matters.

Ms. Serratelli has assisted clients throughout the Central Pennsylvania area including Harrisburg and the surrounding townships, Hershey, Carlisle, Camp Hill, and the surrounding counties. Additionally, she is a trained Mediator in family law and is a strong advocate of mediation as an alternative to litigation when appropriate.

Lori K. Serratelli also has an excellent record as an employment discrimination attorney. From administrative proceedings at the Equal Employment Opportunity Commission and Pennsylvania Human Relations Commission to sexual harassment and race, sex, disability, and age discrimination cases in State or Federal Court, she represents clients in both routine and high-level matters. This includes mediation before the EEOC and in Federal court.

She has lectured extensively on employment discrimination and family law matters and has been a participant, presenter, and advocate for sexual harassment training programs. She also has experience as an independent sexual harassment investigator on behalf of employers.

Ms. Serratelli is committed to providing pro bono service to her community. She has served on various Boards of charitable and non-profit organizations and is a trained CASA (Court Appointed Special Advocate) in Cumberland County. She has been instrumental in developing the Dauphin County CASA program and serves as Vice Chair of the Board of Directors of Dauphin County CASA and is a member of the Board of Directors of PA CASA.  She was appointed by the Governor in January of 2018 to serve on the Victims Advisory Committee of the Pennsylvania Commission for Crime and Delinquency.

After earning her B.A. in English from the University of Vermont in 1975, Ms. Serratelli received her Juris Doctorate from Capital University Law School in Columbus, Ohio in 1978. During her time in law school, she co-authored a law review article on child support issues. She was admitted to practice before the Pennsylvania Supreme Court in 1978. Subsequently, Ms. Serratelli was admitted to the U.S. Third Circuit Court of Appeals; the United States Supreme Court; U.S. District Court, Middle, Eastern and Western Districts.

Ms. Serratelli founded what would become Serratelli, Schiffman, & Brown P.C. in 1978 to offer her services as a family and employment attorney. Steven J. Schiffman then joined in 1980 to form the partnership of Serratelli and Schiffman. Michael F. Brown, her current partner, joined the firm in 1990. John Sheridan became a partner in 2012. When Judge Serratelli was appointed in June 2016, the firm was renamed Schiffman, Sheridan & Brown, P.C.

Association of Family and Conciliation Courts